Despite the concept of HEALTH has always been of great concern for everyone, spirituality also makes up a great part of the human’s constitution since the dawn of time. In the present world, we are faced with the concept of individualization of the human body, where there are numerous scientific studies regarding physical ailments, mental and psychological problems and their treatments, with the spiritual side of men being completely forgotten.

What once was reasonable and of natural association to, has become almost a TABOO. Moreover, when talking about BELIEFS, religions or other concepts related to SPIRITUALITY, many get embarrassed or are repressed for what they BELIEVE. Without placing any merit in any kind of aspect, I want to address the importance of UNDERSTANDING HEALTH and SPIRITUALITY as a WHOLE, since this whole is what constitutes the HUMAN BEING.

MEN has always been concerned with LIFE ever since its inception, seeking for help in NATURE to HEAL the most diverse disorders that arose, regardless if they were of a physical or spiritual nature. At this time, it was believed that the majority of human weaknesses were due to the vulnerability of the SPIRIT.

Nowadays, with the advancement of SCIENCE, much of that culture and concept has been LOST and Men has come to only GIVE VALUE exclusively to scientific concepts. Current studies reveal that the majority of diseases that harm humans are of a PSYCHOLOGICAL nature. Therefore, not feeling happy or feeling distressed, repressed or any other negative feeling that has a DIRECT IMPACT on your PHYSICAL HEALTH. It is as if your body understood your dissatisfaction with life and, in some way, becomes discouraged and stops working properly.

Therefore, alternative THERAPIES as well as holistic therapies, have amassed a large number of followers worldwide, simply because of the feeling of PEACE and WELL-BEING they bring when it comes to SELF-KNOWLEDGE.

Hence, beyond the specific THERAPIES described below, there are countless concerns capable of being treated.

Everything is possible of being treated or improved with THERAPY! 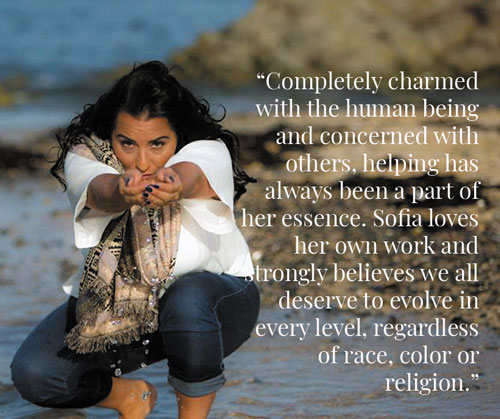 To attribute family tensions to the so-called “generational gap” is to completely miss the point and not admit the full extent of the issues. In fact, existing differences can trigger a series of conflicts which are many times responsible for distancing parents and children physically and, most crucially, emotionally. Many couples are not able to reach a conclusion about parenting. While one may be more conservative, the other may believe that the relationship between parents and children should be more flexible. The differences are not discussed nor respected. In this environment of disagreement, real conflict arises when attempts are only made to be right. Children are caught in the middle of this, free, without any reference of love, cordiality and respect. This leads them to adopt this pattern of coexistence among themselves and in their romantic or friendship relationships.

Thus, years go by without recognizing the conflict, without giving anyone a break and without a real attempt of just sitting down and talking. The children became adults and financially independent. The couple’s personalities are more and more unstructured and those of the children are already formed. In this scenario in which parents find themselves in conflict because they can not find a common ground, the children already do not know how to conversate and always engage in conflicting manners to defend their points of view.

Everything gets worse when the family is financially well. Those who have always had the power, believe that this what is natural. Those who feel inferior fight to prove that they are being wronged and accuse others of using their truths to be manipulative. Everyone fights to prove others they are right until the last consequence. Everyone emotionally isolate themselves and, many times, the physical separation lasts forever.

Besides conflicts caused by personality differences and the difficulties in respecting them, the greed in controlling businesses or even just having a bigger allowance makes the “generational gap” even more complex.

Chemical addiction is another factor that leads many families to seek professional help. These diseases degrade the relationship of the family, leading to emotional and physical isolation. Studies point to that methodology as an important tool to help the treatment of eating and mood disorders. When internal conflicts compromise our own existence, therapy can help us find the root of these problems and it can also help with family disorders.

Therapy establish a relation between two forces which stimulate the Human relationship: the individuality and closeness. The problem takes place when the family does not find the balance between those polar opposites. The main objectives of this therapy are to get people to discover their true personalities and to learn how to behave better in relationships, in order to be able to fully take responsibility for their actions. The emphasis is on the development of family behaviors, through the development of a method for the analysis of relationships. According to the strategic family therapy, conflicts stem from the following causes: inefficient solutions and the denial of symptoms.

Many people are reluctant to find the help of a therapist. They believe that doing therapy is something for crazy people or for those who have nothing else better to do. In spite of this, I ask you to answer some question:

Do you and the other members of your family get sad or angry constantly?

Does your Home no longer possess the same tranquility and calmness?

Are there almost “prohibited” topics to avoid inciting arguments?

Did you realize that your meal time is spent in silence and there is a lack of activities you do together?

Life as a couple is not always easy.

A couple is made up of two people coming from two different worlds, who have to come together to form a team based on love, constituting a family project.

Until that happens, conflicts, commitments, compromises and a lot of communication are inevitable going to happen along the way.

Each element of the couple has their own past, experiences, dreams, perspectives, fears, internal conflicts, relationship models, friends, families and frustrations.

In other words, each element of the couple brings along their own emotional baggage to the relationship.

For the combination of these worlds, or the emotional baggage, to work, in addition to love, sharing and communicating are also essential. This is translated into the couple’s intimacy.

Nowadays, there is often no time or availability to maintain this intimacy as a couple.

Work, concerns, unresolved or assumed divergences and the time dedicated to the children easily pushes each element of the couple to their own corner and worsens their communication with one another, tainting it with guilt projections of both. Therefore, the couple easily distances itself from that intimacy, in which the meaning of living as a couple and their strength lies.

HOW DOES COUPLE THERAPY WORK?

Couple Therapy serves to reconnect the main elements of family life, in which communication is unblocked and conflicts and problems are redefined.

Life as a couple is only possible if the two grow up within the relationship and if they have the ability of questioning themselves, evolving together.

The Therapist will accompany the couple in the rediscovery of their intimacy so that they can keep on building their relationship in a way that allows their family project to have everything to become a full, intimate and strong happy family.

Therefore, Couple Therapy ends up becoming a valuable resource that serves to solve existing problems in the couple’s relationship and to promote effective solutions and guidelines for the couple to find their meaning and strength once again.

If you recognize that your relationship may benefit from Couple Therapy, do not waste more time: Talk with your partner and If he/she also agrees, make your first appointment now.

Sweeping problems under the rug and waiting for the pain to heal over time is not the best solution, if in fact you wish to have a relation.

Sex Therapy is a therapy designed to treat sexual problems.

It always seeks to solve problems related with sex, in the shortest possible amount of time.

What takes place during sessions are conversations between the patient and the therapist, in which some of the mental blocks that impair sex will be progressively eliminated.

Note that most, if not almost all, sexual problems stem from a psychological or emotional cause. Therefore, by undergoing therapy targeted at these types of issues, the patient will start to recognize that old blocks, anxieties and fears will gradually, with his/her sexual life will improve along.

All activities related to discussions as well as technical and professional guidance, with the patient noting his/her improvement as sessions goes by, through stating the positive advancements that have been taking place in their own sexual life.

This therapy is aimed at men and women and is capable of being conducted both individually or as a couple. In both scenarios amazing results can be achieved.

Currently, more than 50% of the Portuguese population presents some sexual related difficulty or problem.

Among the most diverse uncomfortable situations and sexual problems, we can find both male and female sexual dysfunctions: Anorgasmia (Difficulty or incapability of reaching orgasm); Vaginismus (Contractions of the vagina that prevent penetration); Dyspareunia (pain during the sexual relation); Low Libido; Premature Ejaculation; Erectile Dysfunction, among others.

Undergoing Sex Therapy is to improve sex itself, which is a crucial need that is very important in each person’s life. It is being able, in addition to eliminate pain, discomfort and dissatisfaction, to know how to really experience sex, as an intimate, pleasant and healthy activity, without the dread of facing in its wholeness.

You are not supposed to continue to suffer from any sexual related issue. Such problems can be solved and, more often than not, without the need for traditional medicine. They can be solved with Sex Therapy. Even if you think what is affecting you is not treatable, do not live like this and seek the help of a therapist.

There is a wide variety of psychological approaches known today that can be used to work on the psychological side of an athlete. Among them, there is the approach through Cognitive-Behavioral Therapy, which has been widely use in the accompanying of both professional and amateur athletes and sports teams.

Through this way, the athlete and/or the team can be helped to:

An athlete’s psychological preparation should be continuous, covering from core aspects to minor ones. This is because, as a result of this training of psychological skills, athletes and coaches are able to develop mental strategies that help them establish specific plans to deal with adversities, such as:

Practice shows that therapy is an effective psychological approach. With the increase in scientific evidence on what it is capable of providing, it becomes possible to contribute towards an improved performance of athletes, in the face of so many pressures. Thus, therapy helps athletes to achieve a much better performance